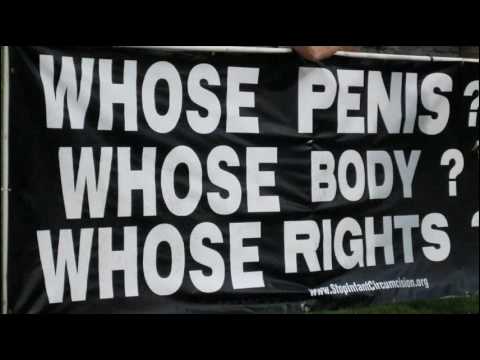 It pleased me to read of a Cologne court’s decision to give the legality of child-circumcision the snip. Even a crotchety old anti-statist like myself can appreciate the few laws that uphold some level of liberty and isonomy in the current set-up, flawed though the arbiters may be. In a culture which prohibits the abomination known as female genital mutilation, the extension of such legal concerns to Y-chromosomers has been a long time coming.

Unfortunately, not everyone shares my sentiments. Beyond the gynocentric mewling of various women’s groups playing Oppression Olympics, Muslims and Jews—two factions who view cock-slicing as holy writ—united in uproar over the ruling (Middle East peace-mediators, take note!). Naturally, in post-Hitler, PC Germany, the whiff of Cologne sent prominent politicos into spasms of supplication:

Angela Merkel’s spokesman has promised Germany’s Jewish and Muslim communities they will be free to carry out circumcision on young boys, despite a court ban that has raised concerns about religious freedom.

The government said it would find a way around a ban imposed by a court in Cologne in June as a matter of urgency.

“For everyone in the government it is absolutely clear that we want to have Jewish and Muslim religious life in Germany,” said Merkel’s spokesman, Steffen Seibert. “Circumcision carried out in a responsible manner must be possible in this country without punishment.”

Coming from the spokesman for the woman who previously declared multiculturalism a failure, that’s quite the volte-face!

Of course, many smelt the blood in the water and helped themselves to a feast. An unnamed Rabbi denounced the prohibition as “perhaps the most serious attack on Jewish life in Europe since the Holocaust”, disregarding the fact that the ruling came as a response to a Muslim botch-job and affects that demographic overwhelmingly. Other Jewcentric voices let loose with their own Godwin attacks; Tinkerbelle, my favourite bottle fairy, brought Giles Fraser’s fallacy-ridden apologia to my attention:

Muslim and Jewish groups have been understandably outraged. This week, Germany’s chancellor Angela Merkel set herself against the court ruling by telling members of her CDU party that “I do not want Germany to be the only country in the world in which Jews cannot practise their rites.” It beggars belief that a German chancellor ought to have to utter such a sentence.

I still find it difficult that my son is not circumcised. The philosopher Emil Fackenheim, himself a survivor of Sachsenhausen concentration camp, famously added to the 613th commandments of the Hebrew scriptures with a new 614th commandment: thou must not grant Hitler posthumous victories. This new mitzvah insisted that to abandon one’s Jewish identity was to do Hitler’s work for him. Jews are commanded to survive as Jews by the martyrs of the Holocaust. My own family history – from Miriam Beckerman and Louis Friedeburg becoming Frasers (a name change to escape antisemitism) to their grandson becoming Rev Fraser (long story) to the uncircumcised Felix Fraser – can be read as a betrayal of that 614th commandment.

As I argued in this week’s Church Times, one of the most familiar modern mistakes about faith is that it is something that goes on in your head. This is rubbish. Faith is about being a part of something wider than oneself. We are not born as mini rational agents in waiting, not fully formed as moral beings until we have the ability to think and choose for ourselves. We are born into a network of relationships that provide us with a cultural background against which things come to make sense. “We” comes before “I”. We constitutes our horizon of significance. Which is why many Jews who consider themselves to be atheists would still consider themselves to be Jewish. And circumcision is the way Jewish and Muslim men are marked out as being involved in a reality greater than themselves.

Let’s see..appeals to tradition, appeals to popularity, argumentum ad Hitlerum, and special pleading: I call that a shitty logic four-for-one.

Also, I must give (dis)honourable mention to this abjectly moronic non sequitor…

Indeed, making choice the gold standard in every circumstance is to concede to the moral language of capitalism.

Fraser’s argument is a perfect example of living thought sterilized by dead hands, prepared to sacrifice his son’s safety on the altar of sanctimonious spookery. What matters the danger of your kid catching herpes from some cocksucker of a Rabbi when set against the prospect of fellowship in the fold? How dare you shed a tear over the corpse of your shorn spawn so soon after the Shoah!

“Health benefits”? I fucking laughed at that one!

Still, such is the angle proponents of circumcision fall back on, once shed of their piety-pandering conceits. Yet, the more the misguided talk up the “health benefits” of neonatal cock-cutting, the more I think the procedure a lazy, barbaric substitute for teaching boys the merits of genital hygiene and safe shagging.

Besides, it’s not as if the pro–mutilation lobby even get their “facts” right…

It is thus categorically not true that circumcision eliminates the risk of penile cancer, although that assertion has been made nonchalantly in a number of papers by Schoen, Wiswell, and Weiss. In fact, the data indicate that only other factors — among them cigarette smoking, genital warts, and 30 or more sexual partners — contribute to the risk of penile carcinoma.

To paraphrase Dr. George Denniston: Cancer of the penis is very rare, with a lifetime risk of between 1/600 and 1/1300. It strikes mostly older men. Even if circumcision could prevent it completely (which it does not), about a thousand foreskin amputations would be necessary to prevent one cancer of the penis. A thousand infants would be mutilated, and several would die to prevent that one case of cancer. Who could scientifically advocate foreskin amputation for this reason?

The claim that male circumcision prevents HIV infection is based on the hypothesis that Langerhans cells in the foreskin are vulnerable to HIV infection. Newly published research finds that Langerhans cells produce a substance called Langerin that blocks the uptake of HIV. The hypothesis, therefore, now has been overturned and the validity of the findings of the RCTs is placed in doubt. A metaanalysis of the studies is needed to verify their accuracy.

Despite the hyperbolic claims of the circumcision advocates, the high rate of prostitution, not lack of circumcision, is the cause of the African epidemic. When RCTs are adjusted for the sex-worker population, circumcision ceases to be a significant source of protection.

When normal, sexually functioning tissue is removed, sexual functioning is also altered. Changes of the penis that occur with circumcision have been documented. These may vary according to the procedure used and the age at which the circumcision was performed, nevertheless penile changes will inevitably occur following circumcision.

Circumcision performed in the newborn period traumatically interrupts the natural separation of the foreskin from the glans that normally occurs somewhere between birth and age 18. The raw, exposed glans penis heals in a process that measurably thickens the surface of the glans and results in desensitization of the head of the penis.

Evidence from Israel establishes a compelling association between ritual circumcision on the eighth day and immediate post-circumcision UTI.

Mueller et al. (1997) reported no difference in the incidence of UTI in circumcised and noncircumcised boys with normal urinary tract anatomy. To put this matter into perspective, a Swedish study by Marild et al. (1998), where infant circumcision is not practiced, found that, in the first six years of life, the incidence of UTI in boys was 1.8 percent, but in girls it was 6.6 percent.44 UTI infection in boys was rare after the first year of life. When UTI does occur, it is easily treated medically. McCracken (1989) and Larcombe (1999) report UTI infections respond rapidly to anti-microbial therapy.

I wonder: if my folks knew then what I know now…

Which brings me back to why the ethnic solipsism influencing this circumcision struggle proves particularly aggravating. Despite the fact that kiddy-circumcision extends through Islamic, American, and African culture(s), one could be forgiven for thinking that Jews held a monopoly on the practice, going by the disproportionate amount of noise and fury coming from their camp. Muslims, often spotlighted as loudmouthed extremists, have been conspicuous in their near-silence over the ruling, leaving their bris-crazy brethren to pick up the slack. Boy, did they ever, hitting their opponents with the full force of Holocaust hyperbole! As far as they see it, banning the mutilation of baby cocks equates to reopening Auschwitz, and the Final Solution to the “Jewish problem” waits just around the corner.

That said, it could be argued that the Holocaust was the best thing that ever happened to the bris business, what with the resultant diplomatic immunity granted to those of Hebraic heritage. Whilst those other victims of Nazi predation, the Roma, still wake up to the sting of piss in their eyes, criticism of Israel’s more suspect acts against the goyim in their midst can, ironically, get one tarred and feathered as some kind of racist. As such, it’s not terribly hard to see how, against all findings, this ritual continues with little in the way of contention; whilst Jewish culture is but one of many that embraces the practice of prepuce-pruning, Hebrewfolk nevertheless hold a notorious historical affinity for the act, one that can be exploited when the opportunity presents itself.

What better time and place than 21st Century Germany: a country wracked by historical guilt and political correctness?

Thus, according to the current discourse, anyone opposed to ritual child-circumcision might as well be high-fiving the Führer whilst reciting the Fourteen Words.

Personally, I’m still trying to understand the logic of these rabid Rabbis: how the fuck does opposing involuntary ritual circumcision make me a Nazi? As I see it, the only thing that unites “intactivists” with hakenkreuzers is their mutual desire to promote the integrity and flourishing of complete pricks.

Still, if my stance makes me a Nazi in the minds of the binary-bound: Sieg Heil, I suppose…

EDIT (28/7/12): All said and observed about the Hebraic cultural enthusiasm for prepuce-pruning, I reckon the group Jews Against Circumcision warrants an honourable mention:

We are a group of educated and enlightened Jews who realize that the barbaric, primitive, torturous, and mutilating practice of circumcision has no place in modern Judaism.

Jews are some of the smartest people in the world. We are 1/3rd of 1% of the population, yet we hold 33% of Nobel prizes. We are smart enough to understand that mutilating a little boys’ penis is not an acceptable practice in modern times.