Touch of the Paedophile! You are Already (Brain-)Dead… (or “How to Make Your Little Boy Feel Special: Complete with Instructions.”)

When I first heard about Amazon selling Phillip Ray Greaves II’s e-book The Pedophile’s Guide to Love and Pleasure: A Child-Lover’s Code of Conduct back in November, I nearly pissed myself with laughter: immediately, the (alternate) title quote from an episode of Law and Order: SVU sprang to mind. Reading the Amazon “reviews” provided more hilarity, what with the whole web world reduced to frothing Pavlovian animals over a book none of them had even read.

Not that reading said book counted as a viable option amongst that lot, seeing as they would’ve had to buy the fucker, and only kiddyfiddlers would ever make such a purchase.

I encountered such sterling Dubya logic on Amazon’s Facefuck page, where anyone who raised even an eyebrow toward the baying mob’s anti-Amazon crusade got smeared as an enabler and supporter of kiddyfiddlers everywhere.

In any case, I saluted Amazon’s chutzpah in selling this terrible tome and applauded their professed stand in defence of free speech–up until they folded to Pavlovian pressure and pulled the paedoguide from their e-bookshelf (a taste of things to come with Wikileaks).

…only to read of Greaves’ arrest, a week or so back, on the True Crime Report site:

Due to public pressure, Amazon was forced to dump the book from its site. But that’s when it also caught the attention of the Polk County, Florida Sheriff’s Department. So undercover deputies contacted Greaves, ordering a $50 copy that was sent — complete with autograph — to Florida.

Alas, Greaves may know the ins and outs of going perv on children, but he apparently hasn’t boned up on his Florida obscenity laws. It’s a felony in the Sunshine State to distribute obscene material depicting minors. So detectives got themselves a warrant.

He was arrested yesterday in Colorado, and has apparently waived his right to fight extradition. He’s expected to arrive at his new home at the Polk County jail today, where he’ll no doubt receive a warm welcome from its current residents.

Reading the reactions on the comment thread, I noticed how many of them differed little from those to the original controversy, which inspired such gems as people claiming his book had fuck-all to do with free speech, people thinking that their pigshit opinions merited a certain elevation on account of them being parents, folks giving the thumbs-up to the state “investigating” folk who bought the e-book, sanctimonious fucks chatting about how free speech ends when it transgresses “decency”, “society”, “common sense”, “morality” and “the children”…

…and, most abundantly of all, the Dubya logic I earlier alluded to.

Don’t like what happened to Greaves? You’re a filthy fucking nonce: a Gary Glitter who takes regular trips to Thailand to bugger babies.

Fortunately, one  or two of us outgrew the merchandise–driven morality of our favourite childhood cartoons.

To bring up the topic of paedophilia amongst the “sexually liberated” folk of the West is to send their mental faculties into cerebral arrest: folk who’d be adequately at ease discussing the (hur, hur) ins-and-outs of homosexuality, abortion, promiscuity, adultery, and even incest seem to work themselves into a lather when the words “child” and “sex” appear in the same sentence. The thought that someone, somewhere, might be jerking off to a Pampers ad seems to awaken the lynch mob mentality like nowt else. I should know, seeing as I live in the UK, a land that harbours an aversion-obsession with the topic that could be called pathological; fuck—once upon a time, you’d have heard me joining in with the blood-baying!

Nowadays, I take a more detached, sceptical perspective on this topic. Many questions have bounced across my brain pan on this topic:

All these questions pale in priority for the pitchfork posse, compared to the most pressing of them all: cage, castrate, or cull?

“But the book is a How-To for possible harm!” comes the collective cry.

You mean along the lines of  The Poisoner’s Handbook, Hit Man, Improvised Weapons of the American Underground and The Preparatory Manual of Explosives?

Gee, glad to see you’re being consistent in your crusades, eh?

Of course, if you were consistent, I guess that’d put you in the dock for your own how-tos for violence.

From the True Crimes Report thread:

I hope someone writes a book on how to sodomize his ass and sells it to prisoners across the country. He should get a kick out of that.

I think I’d like to write that book, Crazy, if only because it would be really easy. It would just be one page with a picture of his ass and the caption, “Insert the object(s) of your choice here.”

I agree! But I wouldn’t even make the lowly scum in prison pay for that, I’d pass it out w/ every commissary dispersment!!!!! Hope he has a really happy holiday!!

“But that book’s different! It’s a how-to for abusing children!”

The complete antithesis of  those sacred, revered, and wholesome texts, The Bible and The Koran, of course:

When you march up to attack a city, make its people an offer of peace.  If they accept and open their gates, all the people in it shall be subject to forced labor and shall work for you.  If they refuse to make peace and they engage you in battle, lay siege to that city. When the LORD your God delivers it into your hand, put to the sword all the men in it. As for the women, the children, the livestock and everything else in the city, you may take these as plunder for yourselves. And you may use the plunder the LORD your God gives you from your enemies.

The Israelites captured the Midianite women and children and took all the Midianite herds, flocks and goods as plunder.  They burned all the towns where the Midianites had settled, as well as all their camps. They took all the plunder and spoils, including the people and animals, and brought the captives, spoils and plunder to Moses and Eleazar the priest and the Israelite assembly at their camp on the plains of Moab, by the Jordan across from Jericho.

Moses, Eleazar the priest and all the leaders of the community went to meet them outside the camp. Moses was angry with the officers of the army—the commanders of thousands and commanders of hundreds—who returned from the battle.

“Have you allowed all the women to live?” he asked them.  “They were the ones who followed Balaam’s advice and enticed the Israelites to be unfaithful to the LORD in the Peor incident, so that a plague struck the LORD’s people.  Now kill all the boys. And kill every woman who has slept with a man, but save for yourselves every girl who has never slept with a man.

Yikes! Just the Koran then.

Are you seriously gonna tell me that there’s a difference between Philip Greaves and “Prophet” Mohammed beyond the far superior fan-count of the latter (almost a quarter of the world and counting)?

Oh, yeah! The latter actually practised what he preached—I forgot.

That said, I don’t see the Muslimfolk I know imitating their prophet’s peculiarity: what’s wrong with them?

Whatever their malady, I must have something similar: I mean, I’ve watched Urotsukidoji loadza times, yet don’t go round raping females with my “tentacle”; my viewing of A Serbian Film hasn’t awakened any latent urge in me to shoot snuff films or knob newborns; and, I must say, I’ve yet to behead anyone after seeing the Daniel Pearl execution vid (though there’s temptation aplenty there, I’ll admit!).

What kind of twisted fuck am I?

Seriously, as something of a misopaedist, I often despair of the way adult minds melt to mush upon contact with—or mention of—kids. If it ain’t a nonce trying to molest a friendly child, it’s a “concerned” parent, politico, or paper trying to molest the rest of the world into child-friendliness; moral panics like this make me think the two have more in common than the latter would care to admit. 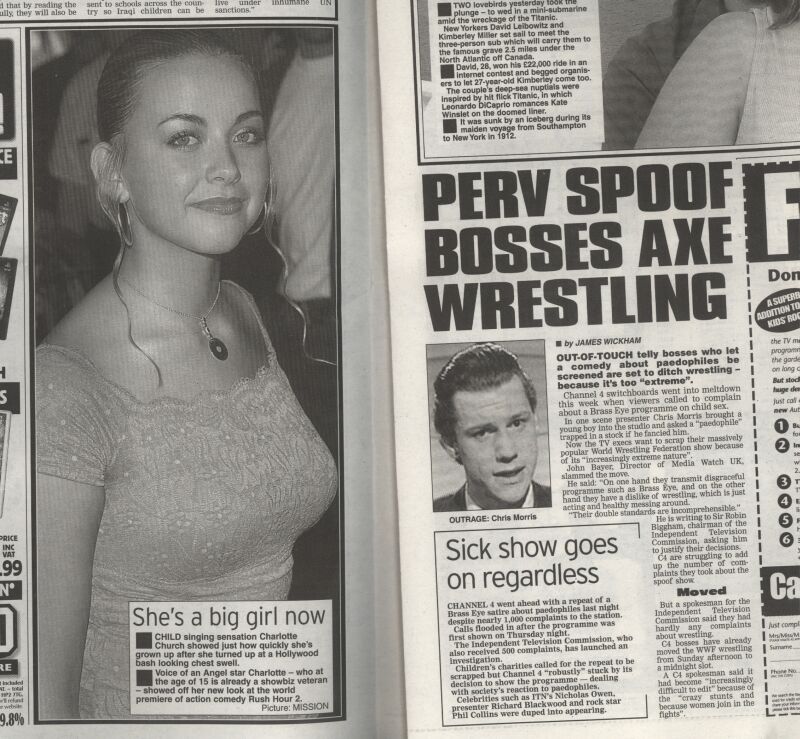 Will reading paedo prose turn you into a playground-prowling pervert? The reviling rabble seem to think so, going by all the noise they’ve made; I guess it’d go some way of explaining their Dubya defensiveness in regard to casting eyes on the bloody book!

Frankly, it makes me question whether what they fear really resides without.

Do paedophiles have hypnotic, Pied Piper powers, even via prose…

…or are those who fear them simply that susceptible?

Perhaps George Taylor’s not the only one stranded on a Planet of the Apes.

28 Responses to Touch of the Paedophile! You are Already (Brain-)Dead… (or “How to Make Your Little Boy Feel Special: Complete with Instructions.”)